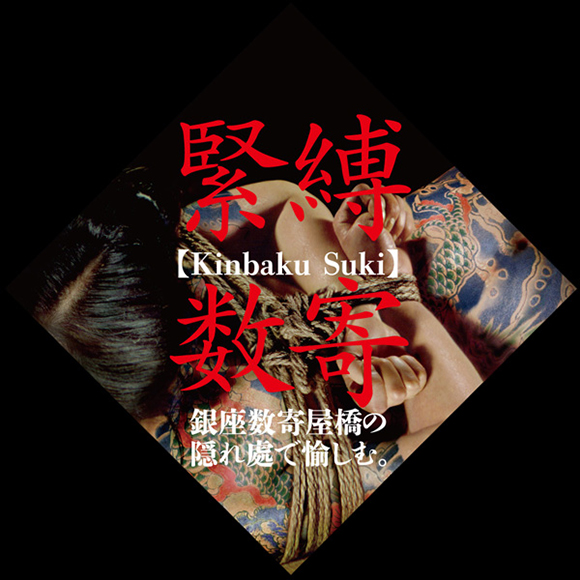 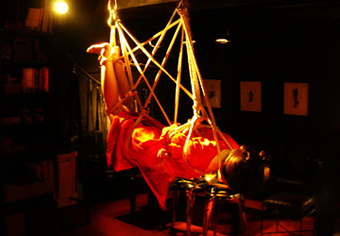 Indulge yourself at an intimate hideout in Sukiyabashi, Ginza

“Ropes” were created to bind things together.
In the past when there were not as many varieties of materials available as today, plants such as hemp, cotton, and straw were hand woven into ropes. Ropes, which still have many uses today, are considered one of the earliest tools used in man's history. Due to their soft yet tough characteristics, ropes appeared in many histories and myths as items that created a mystical beauty.

For instance, spiral patterns of “Jomon ware” (straw-rope pattern pottery) are considered to represent a prayer for prosperity and fertility during the period of transition of human life in the severe natural world.
The concept of connecting, tying, and binding and the skills for representing the creativity based on such ways of thinking indicate that Japanese people surely possessed the “idea of binding” using ropes. This idea has been inherited in an unbroken line to the present day.

Hojojutsu came into existence in the late Muromachi period and reached its peak during the Edo period.
What remained today is said to be the original form of “Kinbaku”.
At the height of its prosperity, more than 150 schools are believed to have existed with over 300 forms of binding used. The aims of Hojojutsu are never to allow escaping; not to injure nerves or blood vessels even if bound for a long period of time; not to let others know how the binding is done; and to make it pleasant to the eye.

Needless to say, forms of binding and their names differ across schools and ranks, and the skills were kept strictly confidential. If the only purpose is to “constrain” criminals, it is very unlikely that this many variations were invented.

Kinbaku is an act of constraining a person using a rope. You may wonder why people find joy and beauty in the act of binding and being bound. Anyone can perform the act if one has a rope. However, actually binding a person using a rope is not as easy as it seems. Those who have ever tried must have experienced or felt in many cases that merely binding a persons did not give enough constraints, gave physical burden to the person being bound, or just did not look very beautiful.

Why not take a look into the world of Kinbaku
at a basement bar in Ginza.

Many of you who have read through this page may find yourself being attached to Kinbaku and fetish world, somewhere down the line.
Such secret desire of yours can be fulfilled at an intimate hideout in Sukiyabashi, Ginza. Black Heart is a well-established SM bar that gained trust from many customers as a place for adult entertainment since its opening in 1998.
You, the customer, play the leading role of Kinbaku in this bar. Kinbakushi (Kinbaku-master) isn’t present. Our staffs will escort you so that you can enjoy a secret time that is just right for you. Please visit Black Heart and enjoy the world of Kinbaku that cannot be experienced anywhere else. 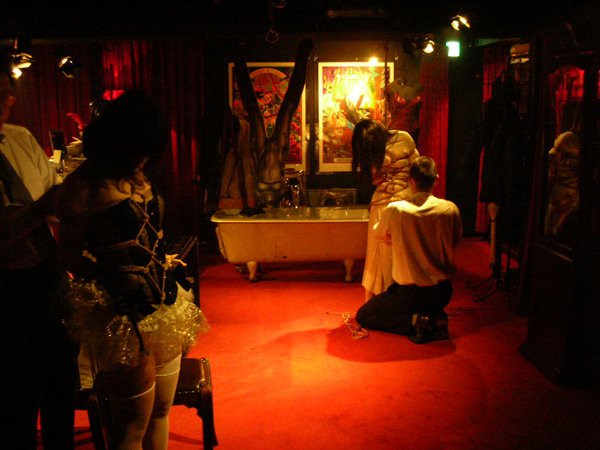 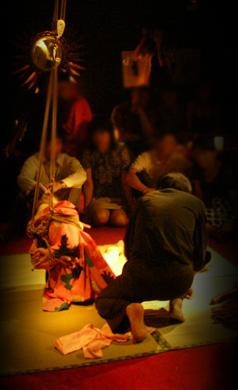 Black Heart has been offering a quite unique Kinbaku workshop for 16 years since its opening. Kinbaku- master late Denki Akechi also served as an instructor for the workshop. This time-proven workshop offers Kinbaku lessons that not only give you a pleasure but may change your life.

The Basic Course is for everyone, including the beginners. No need to bring any equipment to participate. Careful and step-by-step instructions are given to participants so that they can learn to manipulate ropes by themselves. The “Advanced Course” is available for those who have learned the basic skills in the Basic Course and wish to challenge more flexible binding.

You must understand that SM activities, including binding, have certain risks, and therefore you are advised to learn safe Kinbaku skills. Many of our customers who have participated in the Basic Course remarked that they needed a courage to come to the bar in the first place, but they soon started chatting comfortably and pleasantly with our staffs and were invited to participate in the Course.

One of the customers who has taken the Basic Course and is now participating in the Advanced Course was initially attracted to the world of Junichiro Tanizaki. He is now completely fascinated by the deep world of “Kinbaku” and enjoying the practice.

Out staffs usually serve as Kinbaku models, but we sometimes ask our customers to take that position. One of the customers who served as a model commented “I like being bound. But since I am entrusting my body to someone else's hands, anything that accompanies risks need to be avoided. In this workshop, participants always care about me and ask if I am in pain or feeling numb. They seem to have learned these points naturally through the lessons. Without such caring, I cannot enjoy myself. I really like the moment when I am completely bound and people hold my hand to check and see if I am feeling any discomfort. I become very happy, feeling cherished”.

Various Kinbaku events are held at Black Heart. Kinbaku Night is held monthly on the first Saturday. Many customers who want to bind and being bound come to this monthly event, but you can also enjoy just watching. Participants of our annual party include ex-proprietress of Black Heart Hiromi Saotome, Kinbaku master Akira Naka, and female Kinbaku master Raika. And an impressive lineup of Kinbaku masters, including late Denki Akechi, Steve Osada, Akira Naka, Go Arisue, Raika, Asuka Ryuzaki of Kyoto BAR-BARA, Sikou Shima, and Ms. Midori from U.S.A., have performed at “Sadistic Circus”, an annual big event held every fall that is only known to those in the know.